Getting 1000 Gs in Gears pop was a long grind. The servers will be closed on 26th April 2021 and I was seriously under impression that the last achievements will be very tight or un/acheavable for me.

Luckily for me the game developer made things MUCH easier as game closure deadline is approaching. You got more pins from chest and battles, you spent way less on upgrading pins.

So finally on 10th April 2021 I managed to get the last achievement. Phew!

I do not about other players, but I actually ended up installing 2 instances of Android emulators on my desotop PC, and playing the game from 2 accounts side-by-side.

Having boosting session with "myself" was much more realistic to do than look for other people with similar interest from sites like TrueAchievements. For the "League Legend" my strategy was to play with 2 accounts and let one account win every second round... you get about 30 points per victory and negative 20 points if you lose. Slow Grow but it worked. Also sometimes either of the accounts ended up battling against a bot or random live player, so that made the grind even longer. 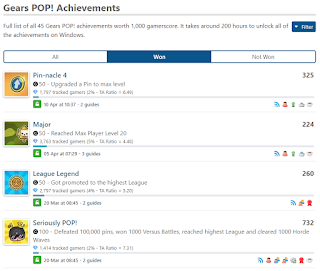 Glad I got it done before the game servers are permanently closed in end of April 2021.