Today can be definitely named as Day of Wordament. First because I spent some time researching it, and some time playing it on both iPad and the web based version.

Got all 9 achievements in one day, but for some reason xbox.com claims I got them on 20th. Maybe its timezone issue and it was still 20th in MS server land, when it was already 21st in my location ! :) 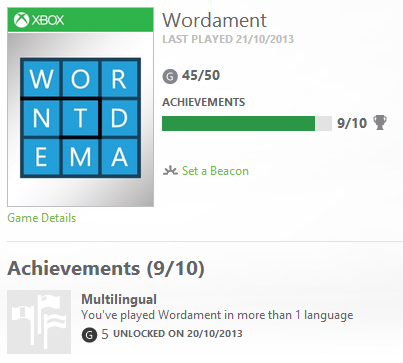 As far as I know it is unique game - ONLY game that you can play it on 5 different platforms: Xbox 360, Windows 8, Windows phone, Apple IOS and Android devices ... and gain different achievements on every platform.

I played today Wordament also on my iPad and got 2 achievements on it, but the Xbox.com site / activity page shows them with no date and last played date is probably the day I first played it: "LAST PLAYED 25/02/2013". Actually none of the IOS achievements have no dates on them. Strange.

I presume I will need to send email to Microsoft and suggest them to fix the time issue on IOS Wordament if possible and rename it on the site. Now it shows me I have 3 Wordaments there all with different amount of achievements:

There is also an Android version, but for some reason my phone is not compatible with it. And Windows Phone version - I dont own such phone.

I also played Team Crossword and got 2 achievements there: 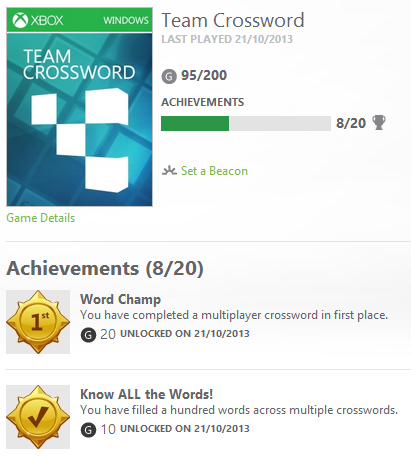 
Besides that I did my daily moves in AlphaJax and tried out 2 web based but no achievement giving games: Zuma's Revenge and Bejeweled 3.

Busy day ahead tomorrow, in the evening, perhaps some new achievements in Borderlands 2. :)