Slow day achievement wise - played several hours, but only got 2 achievements to show.

Most work was done to get closer to 100% completion - replaying levels, getting mini-kits and red bricks, things like that.

As I have played Lego games before, I know it is quite important to get the stud multiplayers as early as possible. Better spend money in early stages on multiplayers bricks so you earn more studs faster as you go along. I already own 2x multiplayer, and have unlocked 2x, 6x and 10x. I am only little cash short to be able to afford the 4x multiplayer. When I have the 2 equipped at the same time, it will mean I will earn 8x studs when playing.

Any-who, here is the "daily" screenshot and link to my profile: 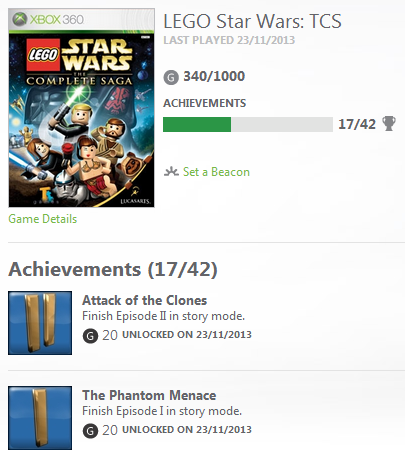