Lego Star Wars II was definitely driving me nuts today. Tried to do the Falcon Flight achievement - one of the remaining "finish level without dying" levels. After attempt 10 or so I gave up ... for now.

Last two "don't die" achievements I got in total with 3 attempts - so I succeeded on one level during my first attempt. I died only once in second level before finishing it also successfully. This time I progressed to middle of the level and died almost at the same time almost in similar way. Not fun at all.

Well, you know how it goes, when stuck in a game, leave it for a while and do something else. So I worked my way little closer to 100% game completion. And then went off to play Wheelman.

In Wheelman did few story missions and did one "hot potato" side mission just to get an achievement :) 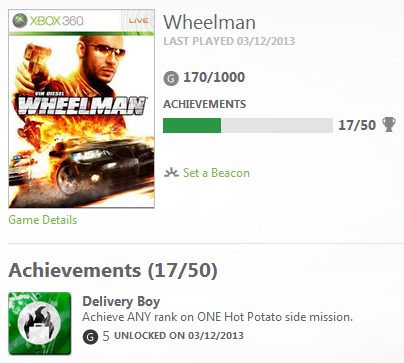